Imagine your memory having turned into some sort of Google database, and then type in the words ‘Thomas Mann sanatorium’. You would expect Mann’s The Magic Mountain immediately to pop up on your mind’s screen. In that novel the elevated sanatorium Berghof in Davos completely takes in its inhabitants; it becomes their world, closing them off from the real world in the lowland. At 1600 meters above sea-level they live through their special epoch of recovery from tuberculosis, or await impending death, while redirecting their sense of time and being.

There is, however, another sanatorium that played its role in Thomas Mann’s complicated life. In Riva del Garda, a small but elegant town on the most northern tip of Lake Garda in Italy, there used to be a Kurort of great renown. It was founded by the Viennese doctor and homoeopath Christoph Hartung von Hartungen (1849-1917), who settled in Riva in 1888. He called his health resort a ‘psychiatric sanatorium’, a Naturheilanstalt, and a ‘Reform sanatorium’.

It is important to remember that this area of northern Italy used to be part of the Austrian-Hungarian empire. Riva then was like an Austrian Riviera. This may explain why Kafka and Rilke (both born in Prague, also part of the empire) went to Riva, hoping to find recovery there. Kafka first came to Riva as a tourist in 1909, and returned in 1913 to take the von Hartungen cure. Earlier even Nietzsche, always on the look-out for the best conditions Europe could offer him to lighten his heavy head, came to Riva. From the Mann-dynasty it was Heinrich who was the first to discover the sanatorium here. Until 1908 Heinrich Mann would be a regular guest. Brother Thomas, like a true Hans Castorp, would several times come to visit him.

It all started in 1893, when Heinrich, plagued by high blood pressure and bronchial disorders, consulted Hartung von Hartungen, who sent him to yet another sanatorium in Mitterbad (Tyrol), near the Italian border. In the years to come he would often return here. In July, 1901, Thomas Mann joined his brother for another stay in Mitterbad (Ulten), after he had gone through the ordeal of correcting the galley proofs of his Buddenbrooks. In February he had begun writing a story called ‘Tristan’ after Wagner’s opera. He was still working on this story when he went to the Mitterbad sanatorium, and ‘Tristan’ developed into his first attempt at making a literary theme out of sanatorium life. In several respects it is a dress rehearsal for The Magic Mountain.

For a large part of the year 1901, Thomas felt “permanently weak”. So after his Buddenbrooks had appeared in October, following doctor von Hartungen’s advice, Thomas went to Riva in November. He stayed here at the Villa Cristoforo (nowadays called the Villino Campi), just outside the sanatorium. The doctor prescribed physical exercise and forbade him to read or write in order to preclude any mental strain.

Thomas would return several times to von Hartungen’s sanatoria in both Mitterbad and Riva, where he stayed both in 1902 and 1904. In a sense he was a hypochondriac who cherished his overly sensitive condition because, he believed, it offered him literary inspiration. Disease and general weakness were accepted reasons to withdraw from active and noisy society and live the self-centred and marginal life of the artist. However, it was his wife Katia who, in 1912, had to be treated ‘for real’ in a Davos sanatorium because she was suffering from tuberculosis. Thomas himself, again, was cast into the role of the patient’s visitor. His experiences as an observer and relative outsider, contemplating sanatorium life, went directly into The Magic Mountain. 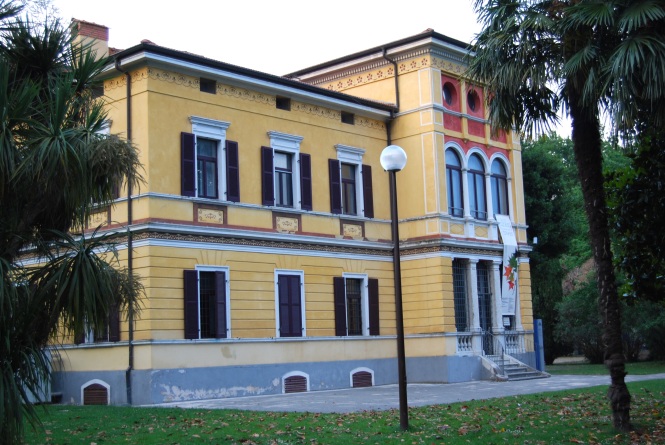 The Villino Campi, just about a hundred yards from the lake and its small beach, has been restored and nowadays is in relatively good condition. The main building of the former sanatorium on the other hand, although still standing, is a wreck. It could be a grandiose hotel if someone would invest the money to bring it back to its former glory. All the right conditions for a resurrection – a successful ‘cure’ for the sanatorium itself – seem to be present. 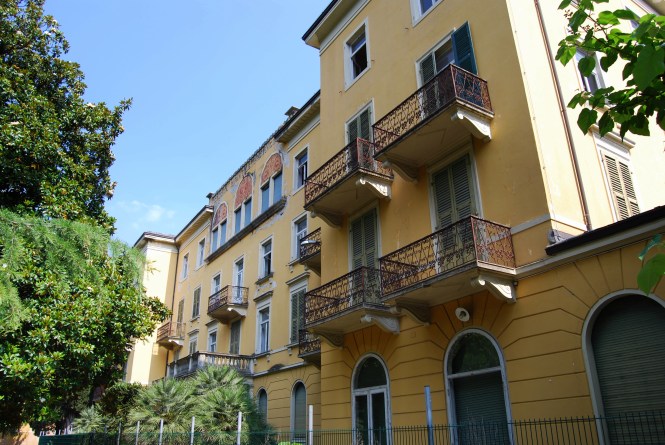 Will it live to see another belle époque? Our troubled times could do with some extra havens of retreat, where pampering the body is the shortest road to ‘inner emigration’.